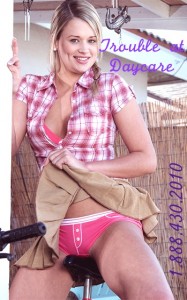 Everyone knows how much I love to play show and tell! Itâ€™s just so much fun getting to see what the other adult babies have under their diapeys, and I love all the attention I get when I show them what I have. But I ended up getting myself into a teeny bitty bit of trouble when I was at daycare today.

It was naptime and I couldnâ€™t get sleepy, so I crawled behind some tables where two adult baby boys were playing and whispering. When I asked what they were doing, Billy said that he wanted to see if Sean had the same thing in his diaper that he had. As soon as the told me, I wanted to see too, so Sean pulled down his diapey and me and Billy leaned in close to peek. It looked just like what Daddy had expcept a little smaller! Your turn! Sean whispered. Billy leaned back and pulled his diaper down, his peepee was a teeny bit shorter than Seanâ€™s, but it looked bigger around. I started thinking about whether it would fitâ€¦

Sean reached out and touched Billyâ€™s peepee while touching his own. Then they both looked at me and said it was my turn. I looked down at my diapey and pulled it down so they could both see. First Billy reached out, then Sean. They both had their fingers touching me and rubbing over my lippys. Sean said I should pull up my t-shirt too cause I looked different from them up there too. I pulled it up and they moved their hands up touch my boobies too.