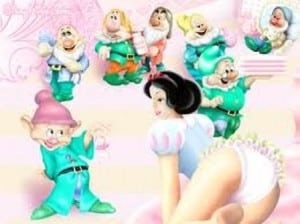 How about a naughty bedtime story?

We all know the story about Snow White and how she hid from the evil queen at the house of the seven dwarfs.

Well, let me tell you things weren’t as innocent between them all as some would lead you to believe. In fact, Snow White knew how to look all sweet an innocent to the outside world, but behind closed doors she was a whole different person!

After getting stir crazy from cabin fever one night, Snow White had an idea!

“I know what we can do tonight,” she said in her sweet, lyrical voice.

“What’s that?” The dwarfs replied in unison.

Snow White had a twinkle in her eye. “Why don’t I wrap this dishtowel around my bottom like a diaper, and you can all be my daddies?”

The dwarfs all looked at each other, smiling. Dopey let out a silly laugh. “Why, that sounds like a grand idea!” Doc spoke for the group. “Let’s do it!”

As Snow White pulled her panties off and laid down, spreading her legs for all to see, the dwarfs all lined up to help put her diaper on.

All, that is, except for Grumpy. He crossed his arms and announced to the group, “If she shits herself, I am NOT changing her!”

Bashful turned a bright shade of red when he saw Snow White’s perfectly pink pussy, and hid his face in his over-sized sleeve.

Sleepy yawned after he rubbed her bottom with lavender-scented baby lotion.

Doc grabbed the baby powder and a huge puff came out of the bottle.

This, of course, made Sneezy sneeze.

Happy suddenly had a huge tale-tell bulge that showed he was getting a little too happy.

At this point, Happy wasn’t the only one whose “happiness” was apparent. Doc, being the wisest, knew exactly what to do in this situation.

He pulled out his little dwarf penis, and began playing with it while he watched Snow White. The other dwarfs did the same. Snow White loved being watched by so many guys. She was tingly all over! She suddenly got so hot, she had to take off all her clothes!

This caused all seven dwarfs to moan in unison. Their little dwarf hands moved faster up and down their little dwarf cocks. Snow White looked around at the circle jerk, and her sweet little pussy started to get wet.

Doc was the first to spurt out his love juices. This seemed to set off a chain reaction, with all the other dwarfs coming one by one. That is, of course, except for Dopey. It looked like his brain wasn’t the only thing that had delayed reactions.

Knowing what kind of longevity Dopey had was all Snow White needed. She looked Dopey in the eyes, licked her lips and fondled her breasts, inviting him over. He shyly smiled, dug his foot into the floor, then slowly came up to Snow White. She grabbed him by his ears and kissed him, then pushed him down to the floor.

With a giddy whoop, she pounced him and eagerly rode him, smiling at all the spent dwarfs who failed the audition.

Dopey’s “O” face was the funniest thing Snow White had ever seen. He made her giggle! After she came, she kissed him, then went to take a bubble bath.

And wouldn’t you know it, that little guy’s “O” face didn’t change for a whole day.