Ok, so I know that I can usually be seen as a sweet, loving mommy who likes to have lots of fun â€“ and thatâ€™s true (mostly). But there is a strict, dommy side that I like to indulge in as well. With that in mind, let me share with you what I have been pondering.

Seems that some little ones like to be mommyâ€™s little helper, or be trained as sissy maids. This is all fine and dandy, but rarely are the chores set before them done to my satisfaction. Now the question is what is the appropriate punishment that will instill a proper work ethic and make them strive to perform to my standards? 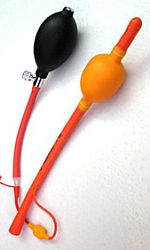 The first punishment for failure might seem a bit harsh â€“ an enema administered with an inflatable nozzle to ensure non-leakage. Then the task would have to be performed again while they hold their water, nozzle still in place. I would be standing over them watching every movement, with a stop watch in hand, but not giving any signs of approval or disapproval. This would add to the anxiety that they would already be feeling. I would not even tell them the time frame in which the task would have to be performed and, trust me, there would indeed be a time requirement.

If, after the second go at the task they have failed once again, then they would go over my knee, bare-assed, water still inside them, and be given a long and harsh paddling. The nozzle would be removed, but instead of letting them got to the potty to empty their bowels, the diaper would go back on, with a very snug pair of rubber pants over top of them. This would force them to fill their diaper to the brim while they try and complete the task yet again.

Now, if for some reason the chore was not done properly yet again, well, lets just say that I have a very long list of punishments at my disposal â€“ from guzzling castor oil, being forced to hold a bar of soap in their mouth with their teeth, various forms of spankings with various implements, the tightly tying of genitalia, and the standing in a metal wash tub in the front yard until there is crap streaming out the edges of the diaper and down their legs. And I havenâ€™t even touched on the subject of what I would do with a candy thermometer. Needless to say, the list goes on and on.

So, have I burst your bubble on what a sweet, gentle mommy I am? And more interestingly, as these visuals settle in the recesses of your mind, do they fuel your worst nightmare, or your wettest fantasy?